Hearing friends announce a new pregnancy can bring great joy. It also can bring a unique mix of emotions known only, perhaps, to couples struggling to conceive. The Ranneys found hope for their family at Duke.

“It seemed like all my friends were having babies,” said Leanna Ranney of Raleigh. “It was like, ‘I went off birth control last month and I’m pregnant!’ You feel happy for them, but at the same time, you wish it was you.”

Leanna and her husband, Bill, had been trying to conceive for two years. A friend who knew their struggles referred them to Thomas Price, MD, a fertility specialist at the Duke Fertility Center. “We met with him and he was not rushed at all,” said Leanna. “He took a ton of history from us. We were very encouraged after our first visit.”

Tests were scheduled right away, and the couple soon decided to try an intrauterine insemination (IUI).

After the procedure, the Ranneys had to wait two weeks to learn the results. “During this time I emailed Dr. Price three or four times with different questions,” said Leanna. “He would always respond within the hour, even on the weekends. He was so compassionate and understanding and never made me feel like I was bothering him.”

Unfortunately, the couple was not successful in their IUI attempts. Leanna remembers being comforted in the clinic by the nurse practitioner. “She teared up, too. She knew how much we wanted a baby.”

The Ranneys moved forward and eventually decided to try in vitro fertilization (IVF). “The staff gave us so much hope because they were so optimistic that this was going to work,” said Leanna.

And work it did. In January 2013, the couple learned they were pregnant. “It was the most joyous feeling,” said Leanna.

Leanna’s prenatal care was transferred to her obstetrician. “After our final ultrasound, Dr. Price and the whole staff came to tell us goodbye. I emailed him when our daughter Adalynn was born, and he came into the clinic early one day so he could meet her.

“He wanted us to have a baby as much as we did,” said Leanna.

Duke Fertility Center has multiple treatment options to help almost everyone build the family of their dreams. Call to request an appointment today! 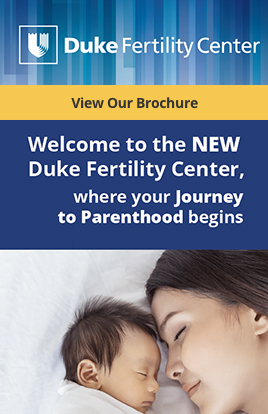